What Is Actually Happening With… Tesla’s Gigafactory? 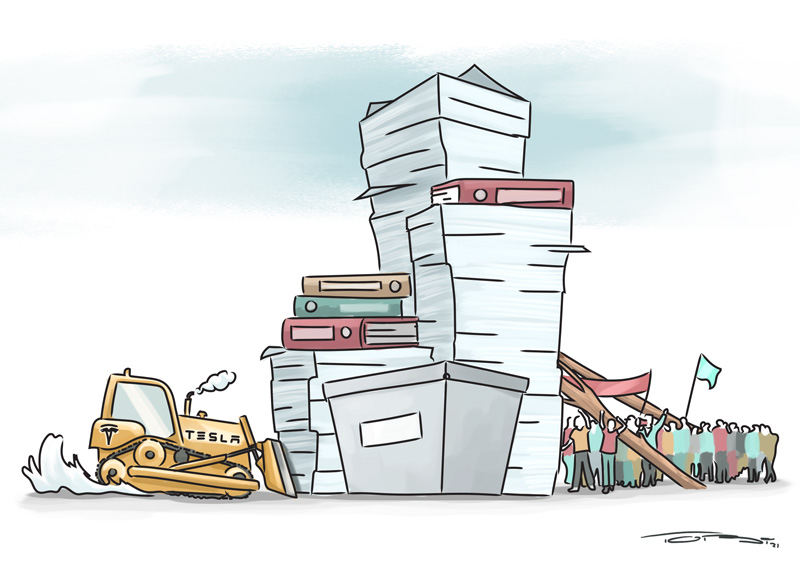 It could have been so simple: Tesla electric cars made in Germany. But the planned e-car factory in Brandenburg keeps making headlines and its completion is delayed.

In late 2019, Elon Musk, CEO and driving force at Tesla, announced the construction of a gigafactory for electric cars in Germany. The groundbreaking ceremony took place in Grünheide, Brandenburg, not far from Berlin, in early 2020,  with completion scheduled for July 2021. But the U.S.-based company has now been in a clinch with environmentalists and authorities for some time, because a large area of forest was cleared for the construction of the factory. There are also fears that the plant’s water consumption will lead to a shortage of drinking water in this dry region.  This resulted in protests against the construction project by local residents and various environmental groups.

Building at the company’s own risk

Undaunted by complaints and objections, construction of the plant is moving forward. In June, plans for battery production on site were added to the building application. Legal approval for this phase of construction is still pending. A common thread running through the project is that Tesla does not yet have a final building permit for the overall facility. Meanwhile, 14 preliminary permits allow construction, but at the company’s own risk. If the final permit is not granted, the building work would have to be reversed at the company’s own expense. Mid-year, the construction story was enriched by another episode, as Tesla had to pay a fine for erecting unauthorized tanks on the construction site.

There is no doubt that two very different world views meet in Grünheide. On the one hand, there is a dynamic billionaire who brushes off concerns about water shortages by pointing out that we are not in a desert. On the other hand, a rather leisurely German approval process.

The delays then forced Tesla to write an urgent letter to the Higher Administrative Court of Berlin-Brandenburg. The letter criticized the lengthy approval processes in Germany. The Tagesspiegel quotes the ten-page letter as saying that they would deter necessary investments in clean energy projects and infrastructure and make it virtually impossible for Germany to achieve its climate targets. At the heart of the matter is nothing less than the question of the extent to which intervention in nature is permissible in order to achieve a positive global benefit.

Brandenburg’s Minister of Economics Jörg Steinbach told Handelsblatt that the project certainly has a regional benefit because Tesla has put Brandenburg on the radar of other companies that also want to relocate there. Every new job is highly welcome in the economically underdeveloped federal state. In return, companies from future-oriented industries benefit from the expansion of renewable energies, an area in which Brandenburg is doing well.

A glimmer of hope

As Minister Steinbach said in a recent interview, he expects the final – and, from Tesla’s point of view, positive – decision on the building permit to be made in the fourth quarter. Most environmentalists also no longer expect a decision against Tesla. The issue now is much more about damage control and how the plant can be designed to meet minimum nature and environmental protection requirements, Christine Schröder of the Naturschutzbund Brandenburg told the Washington Post. The newspaper reported in July on Elon Musk’s visit to Grünheide. Originally intended as an inauguration date, Musk used the day to once again promote the project. He said that 80% had been completed. During his most recent visit to Brandenburg, he then also met with CDU chancellor candidate Armin Laschet, who spoke out in favor of accelerated approval procedures. In exchange, Musk wants to expand local communications to increase acceptance of the gigafactory, reports Rundfunk Berlin-Brandenburg (RBB). Once approved, 500,000 vehicles are expected to roll out of the nearly 6 billion euro factory annually. As the Washington Post adds, in spite of the delay, the pace of construction is record-breaking by local standards – just think of Berlin Airport.