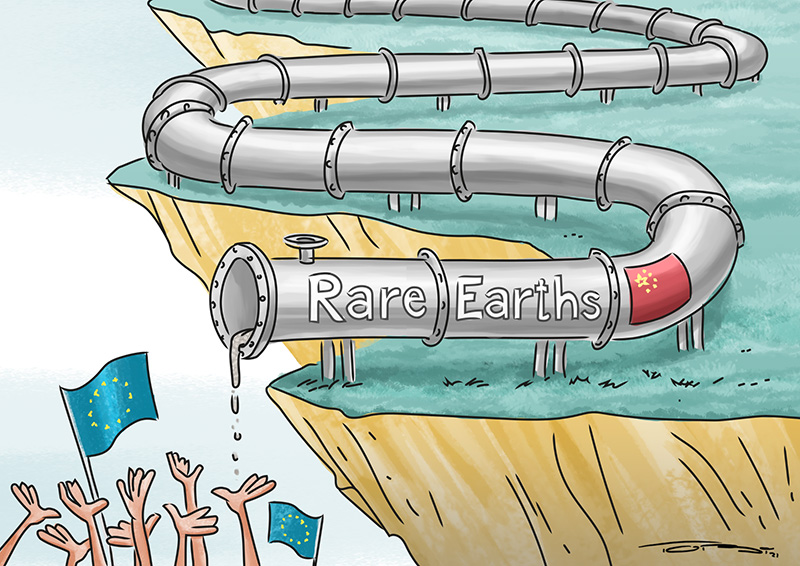 Just like the previous year, 2021 was dominated by the Corona pandemic. As perhaps never before, the complexity and vulnerability of global raw material and commodity flows were brought to the attention of a broad public. The same applies to the strong dependence on Asia, especially on China, the workbench of the world and the main exporter of many raw materials. The expansion of electromobility and the planned energy transition also raised awareness of the fact that this dependence will increase significantly in the future.

The main shortage in the past year was of semiconductor chips. Numerous sectors were affected, but the automotive industry suffered particularly severely from the shortage of electronic components that control a wide range of functions in modern vehicles. The problem was partly homemade, as automakers reduced chip orders due to lower demand in the previous year, but were then caught off guard by consumers’ rapidly increasing appetite to buy. Chip manufacturers had found other buyers for their products in the meantime.

In order to still be able to deliver vehicles, manufacturers such as Porsche even went so far this summer as to partially install placeholders without functions, which are later to be exchanged for real chips. Some plants, such as Opel’s in Eisenach, have even been temporarily shut down.

The shortage will cost the automotive industry 210 billion dollars, according to a frequently quoted forecast by the consulting firm AlixPartners. And the end of the crisis is not yet in sight. In general, the demand for chips is likely to increase even further, because this year carmakers have made a growing commitment to e-mobility, which is much more chip-hungry. At the same time, politicians have been exerting pressure: the EU Commission, for example, wants to ban the registration of new combustion engines from 2035.

Car manufacturers are now facing a whole series of challenges. This is because permanent magnets made of rare earths are predominantly used in the motors of electric cars. They also come mainly from China. This market power has accordingly prompted the European Raw Materials Alliance (ERMA) to appeal to policymakers to take action in order to prevent the auto industry from migrating toward the sources of raw materials.

In general, the demand for more independence in the supply of raw materials was heard again and again this year. There were also numerous reports about the (planned) development of new raw material deposits. Angola, Australia, Canada, Tanzania, but also the USA in the form of the well-known Mountain Pass Mine – until the mid-1990s the world’s most important rare earth deposit – were preparing to break the Chinese supremacy; at least partially. Of course, this has not gone unnoticed in the Middle Kingdom. The announced merger of the state-owned rare earth companies is probably not least an attempt to consolidate and expand the company’s own market position. In this context, a statement by the Minister of Industry and Information Technology, Xiao Yaqing, was quoted: “Our rare earths did not sell at the ‘rare’ price but sold at the ‘earth’ price[…].” So the rare earths were sold at the earth price, in part because the various companies would compete with each other, he said.

This is likely to change in the future as a result of the merger, and prices are expected to rise, analysts said. Also, because China no longer wants to just extract, process and export raw materials, but additionally wants to earn money from the downstream stages of the value chains, i.e., from finished products. These include, for example, electric vehicles or plants for the generation of renewable energies.

To meet the needs of the processing industry, the country is also dependent on imports of rare earths, for example from Myanmar, where half of the heavy rare earths that China processes come from. Due to the pandemic, raw material deliveries came to a standstill in the summer, which led to a rise in rare earth prices. Exports to China only started again at the end of November. This should only have a short-term effect on prices, analysts say, also in view of China’s own growing demand for raw materials due to e-mobility and sustainable energy production.

The massive expansion of renewable energies was a key issue in the German election campaign. The Greens’ demand of setting aside two percent of the country’s territory for wind energy ultimately found its way into the coalition agreement. As early as 2030, wind, solar and the like are to contribute 80 percent of the electricity mix. The new government thus has a tight program ahead of it, because the share of renewable energies fell by four percent in the past year compared with the previous year and now stands at 42 percent, according to calculations by the Center for Solar Energy and Hydrogen Research Baden-Württemberg (ZSW) and the German Association of Energy and Water Industries (BDEW).

At this point, the question arises again as to how the supply of the resources required for the production and operation of the plants can be secured. Corresponding gaps would have to be closed, the ZSW therefore noted in December. Depending on the type of wind turbine, 24.8 – 201.5 kilograms of neodymium and 1.8 – 15 kilograms of dysprosium are required per megawatt for its construction. In addition, there is silicon or tellurium for solar cells. The quantities of other metals for the constructions and lines are not yet included.

The Goods Are There, the Transport Containers Are Missing

However, the logistics crisis clearly demonstrated that the presence of components or finished products does not mean that the desired goods will be delivered. A lack of freight containers and congested ports led to a domino effect and empty warehouses. This was particularly evident in March, when the cargo ship Ever Given blocked the Suez Canal for almost a week; several hundred ships were jammed. The container crisis, meanwhile, continued to spread when the neuralgic link had long since been unblocked. There were also warnings of empty shelves at Christmas, which proved to be the case for some product groups and resulted in a loss of sales for retailers in what was their most important quarter.

Reliable forecasts on the normalization of the situation are hardly possible in view of the constant stream of new virus variants. However, new areas of application and approaches to diversifying supply chains at least point to an eventful 2022 for the raw materials sector. Things continue to be suspenseful.

We wish you a good start into the new year, stay healthy.

Your editorial team from rawmaterials.net