The Prototype Kilogram – Forged From Iridium and Platinum 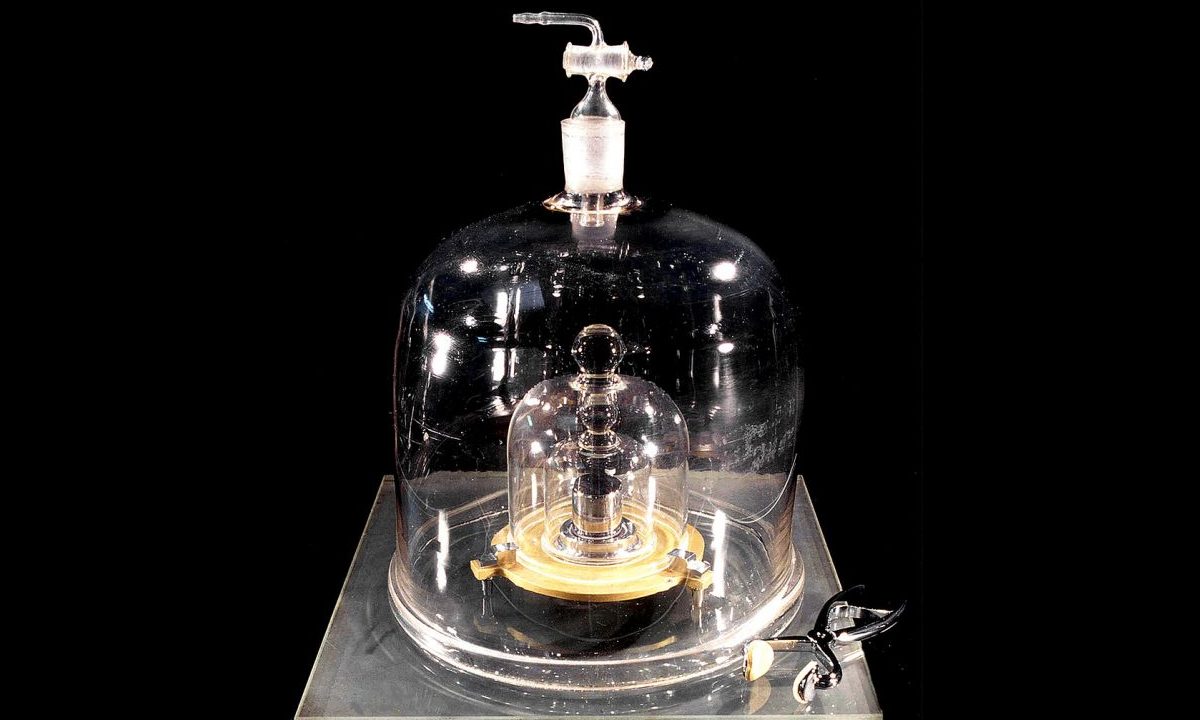 Standardized units of measurement are essential in science as well as trade and technology. However, the process of achieving standardization has been complicated, and refinements were still being made until recently.

From 1789 onwards, the French Revolution turned convention on its head. Apart from the overthrow of the Ancien Régime, the revolutionaries also wanted to reinvent how time was measured. A day would be divided into ten hours, each lasting 100 minutes. But decimal time only remained in effect for a short while before its use was suspended by decree in 1795. The standardization of measures and weights, of which there were countless in France and elsewhere in Europe, was far more successful. The French Academy of Sciences based in Paris convened an expert commission to devise an entirely new system. The unit of length, subsequently named the meter, was to be equal to one ten-millionth of the distance from the North Pole to the Equator, measured along the meridian passing through Paris. The distance from Dunkirk to Barcelona, two cities on the same meridian as Paris, would be used for the calculation. This was much less onerous than a journey to the North Pole. Nevertheless, the undertaking entrusted to Pierre Méchain and Jean-Baptiste Delambre was delayed until 1799 by the turmoil of the French Revolution. In the meantime, a series of bars made of the precious metal platinum were ordered to be used as a reference for the new unit of length.

The fact that platinum was chosen is quite astonishing, as this material was only dealt with intensively in Europe from the middle of the 18th century onwards. The platinum bar whose length was closest to the calculations of Méchain and Delambre was placed in the country’s National Archives in the summer of 1799 and became known as the mètre des Archives.

With this reference for the unit of length, it was also possible to state more precisely the hitherto provisional definition of the gram: the weight of a cubic centimeter of water at four degrees Celsius, the temperature of water’s maximum density. Likewise made from platinum, the kilogramme des Archives also ended up in the Archive’s facilities in Tuileries Palace. The metric system was born.

Platinum and Iridium for the Second Prototype Kilogram

Even in their country of origin, however, the meter and (kilo-)gram did not have it easy, and it was well into the 1850s before they would finally become established there. In parallel, other European countries also began using them. The Treaty of the Meter signed by 17 countries (including the German empire and, of course, France) in 1875 was intended to further drive the development and harmonization of the metric system. Furthermore, the development of three new kilogram prototypes was agreed upon. One of those, KIII, ultimately replaced the original prototype kilogram in 1889. It is still stored to this day in a safe of the International Bureau of Weights and Measures (BIPM) in Sèvres, a suburb of Paris.

One of the copies of the original kilogram (Photo: Physikalisch-Technische Bundesanstalt)

Unlike its predecessor, the new prototype kilogram is not made of platinum alone but is instead an alloy of 90 percent platinum and 10 percent iridium. This gives it greater hardness, which should minimize material abrasion. After all, the cylindrical object also referred to as Le Grand K, with a height and diameter of 39 millimeters, has to be cleaned every now and then to remove dust, despite being stored under two glass bell jars.

Le Grand K Is Getting Lighter

Given that two precious metals have been used, you would be forgiven for thinking that the standard kilo would be unchanging in size. After all, platinum-group metals are also used today in high-tech applications with the lowest error tolerances. But regular remeasurements have revealed something astonishing: Le Grand K is getting lighter. It has lost 50 micrograms, the weight of a grain of salt, since it was weighed in 1992. Although the reason for this is not yet known, the potential implications are so great that scientists set about trying to find a new basis for the unit of measurement. This had already happened for the meter, for which the speed of light in vacuum has been the accepted definition since 1983, and for the second, which is defined by an atomic physical constant.

At the 26th General Conference on Weights and Measures in Versailles in November 2018, it was decided that the Planck constant would be used in future to calculate the kilogram. This decision came into force in May of the following year. Although the details in respect of this natural constant may be difficult for most people to follow (including the author of this piece), according to scientists it is at least futureproof.

On the other side of the Atlantic, meanwhile, the United States customary system is commonly used in many areas of daily life. This was developed from units used in England, which had previously ruled the US. For measuring lengths alone, there are plenty of units (such as inches, feet, yards and miles) to puzzle European visitors, with considerably more again for volume measurements.