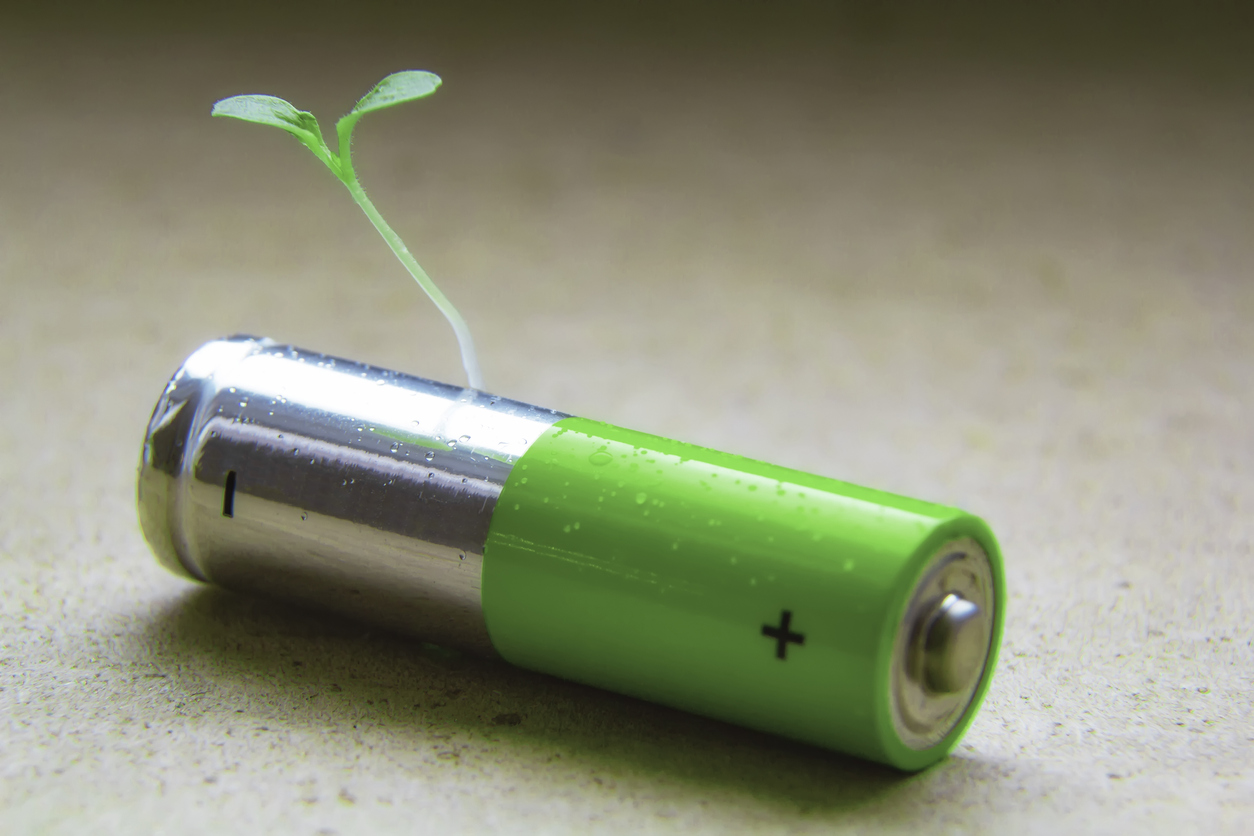 The EU intends strengthening the circular flow economy and recycling. But it’s not all that easy. To date, only 1 % of rare earths are being recycled.

Simply throwing away mineral resources from appliances which have reached the end of their service life is “the most stupid thing you can do,” wrote business journalist Helmut Martin-Jung in mid-August in the Süddeutsche Zeitung. And of course the man is right. Retrieving and treating strategic metals and rare earths from what are known as end-of-life products, i.e. appliances which have become unusable, is not only complex and expensive. The hunger for these mineral resources in numerous industries is becoming greater with the growing possible uses. Whether semi-conductors, photovoltaic, wind energy or electromobility – strategic metals such as lithium, manganese, copper and gallium, as well as rare earths such as neodymium and praseodymium, are playing a decisive role in an increasing range of future technologies. The sought-after materials can be found in LEDs, displays, smart phones, iPads and laptops, they are concealed in turbines and power units. And they are used in electric motors and e-automobile batteries.

A functioning circular flow economy and the massive expansion of recycling rates are therefore in the focus of many current considerations at political and industrial level. At the end of 2020, in the context of the New Green Deal, the EU presented a proposal for modernizing the EU battery directive. Among other things, this envisages an increase in the recycling potential of batteries, a mandatory proportion of secondary raw material (i.e. the use or recycled mineral resources) and a harmonizing of the product requirements for batteries. The latter is important in order to be able to improve standardization and dimensioning in the future. The new EU regulations are to come into force in January 2022.

However: Depending on the mineral resource and the area of application, recycling is anything but simple. This is due primarily to the fact that the material is almost always used as alloys or in a chemical compound with other mineral resources. Separating these homogonously or in reusable quality in the recycling process, is either almost impossible or associated with such high levels of complexity and costs that the processes – at least up to now – can only be depicted in the laboratory. To date, rare earths, in particular, which are always present in alloys and always only in small quantities in end-to-life products, have practically never been recycled. In fact, less than 1 %, as the FAZ  cites the research team working with Simon Jowitt from the University of Nevada in Las Vegas from a review article published in 2018. A  report  of the German Federal Association for Waste and Electronic Waste Management and Vehicle Recycling (BVSE) says: “Not only does the retrieval from products remain difficult, so too is separating the chemically-similar elements from one another”. Even so, or perhaps for this very reason, increasing numbers of scientists in Germany are researching new recycling technologies for rare earths. But more about that later.

It is hardly surprising that, in the context of the New Green Deal, the EU is turning its attention particularly to batteries as, by international comparison, the European Union cuts a particularly poor figure. “Large volumes of the batteries binned for recycling in Europe are exported to Asia and exploited there,” according to the latest study ”Mineral resources for e-mobility“ published by the German Federal Institute for Geosciences and Natural Resources (BGR) together with the German Agency for International Cooperation (GIZ). This shows China in 1st place in the worldwide ranking for the recycling of cells, cathodes and anode materials. While around 70 % of battery cells were recycled by Chinese companies in 2018, the figure in Europe was under 5 %. According to the study, this is due to the fact that China already has a major market, recycling receives state aid and the companies have good access to recyclable material. The study states that “the Chinese Ministry for Industry and Information Technology (MIIT) obliges manufacturers of e-vehicles to set up and standardize recycling plants for batteries”.

The situation is particularly difficult when it comes to traction batteries, those, large high-performance storage batteries used in the rapidly-expanding field of electromobility. Whereas in some cases recycling of small appliances such as smart phones is progressing well – Apple, for examples is now using 99% recycled wolfram and 98% recycled rare earths in the iPhone 12 – the recycling rate for traction batteries looks bleaker. In this area research is therefore also being carried out into deposit return schemes and rental systems, substitution options and, above all, second life solutions.

“Storage batteries which are no longer powerful enough for automobiles are by no means useless,” writes the ADAC. As a rule, even after around 1,500 to 2,500 charging cycles they still have an energy content of 70 % to 80 % of their original capacity. Therefore it makes neither economic nor ecological sense to dispose of them in this condition. Instead, the storage batteries can be “reused in so-called second life, i.e. in stationary applications”. Corresponding test series on aging processes in the laboratory have shown that the second life can extent to a further 10 to 12 years. And the ADAC is also familiar with a prominent example: In BMW’s Leipzig plant, where the BMW i3 is built, the corporation has set up a stationary storage unit consisting of 700 interconnected i3 storage batteries. The large reservoir of solar and wind energy generated at the BMW plant is stored in this system and then used in production.

But second life is not always a suitable solution. Particularly when, unlike at BMW, the storage batteries in stationary applications cannot be used on site by the same producer. The study from BGR and GIZ cited above states: “The cells which can no longer be used in e-vehicles can be utilized as stationary energy storage units on a small or large scale, such as energy storage units for renewable energy in residential buildings. Individual components too can be removed and resold as spare parts.” These processes are labor intensive, however, and different manufacturing and packaging of the batteries (including in compliance with fire regulations) would make the recycling and automation more difficult.

But this leads to new problems in recycling. Because the reduced cobalt content makes the storage batteries literally less valuable and thus less attractive for recycling. “The lithium-cobalt-oxide batteries which were common from around 1990 – 2010 but are no longer used were worth about € 8 per kilogram due to the high cobalt content,” according to the BGR/GIZ study. The modern NMC batteries, on the other hand, have a value of just € 4.70 to € 5.50 per kilogram. As the authors of the study state in the summary “statutory product requirements on the use of secondary raw materials also had a major impact on the demand for and profitability of recycling”.

The complexity of recycling lithium-ion-batteries (LIB), particularly the large traction batteries, is described by the German Mineral Resources Agency (DERA) in a special issue “Battery mineral resources for e-mobility“ which appeared in March 2021. This states: “Because multi-phase, complex separation processes are required due to the different cell chemistry and battery designs, standardization has not been possible to date. The number of cells and modules in a traction battery varies greatly; it depends on battery performance, battery type and the manufacturer. “The weight of a single cell can range from around 50 g to up to 2 kg. In a traction battery with a capacity of over 80 kWh, thousands of cells can be interconnected. The consequence: “The vast majority of the processes are still being developed and are still operating only on a small scale,” according to the DERA. Where it takes place at all, the retrieval of the economically-valuable metals cobalt, nickel and copper is being implemented.

Algae, viruses and chemistry – the future of rare earth recycling

The retrieval methods for rare earths are almost completely in the laboratory environment. As described above, numerous hurdles are currently hampering an economically and industrially attractive approach. But many researchers believe that this is set to change in the future.

In the Austrian town of Krems, for example, scientists are working on releasing and reusing rare earths from electronic scrap. With the aid of algae. Speaking to the TV station ORF, Dominik Schild, Professor for Biochemistry at Krems University of Applied Sciences, stated: “The electronic scrap, for example microchips from cell phones, is ground to a whitish-yellow powder. This is then added to a solution containing algae or yeast. The algae attract the rare earths and absorb them in their cells.” The rare earths then have to be removed from the algae cells by – to put it in very simplified terms – first removing the outer envelope of the cell and then breaking open the inner envelope. The research is being funded by, among other organizations, the European Regional Development Fund “Interreg”. However, the project is still in its infancy.

The same applies to a project on which the Mitteldeutsche Rundfunk (MDR) reported in January. According to this report, the Helmholtz Institute Freiberg for Resource Technology is working on a method of recycling rare earths with the aid of bacteriophages. In an elaborate process, these viruses, which actually attack bacteria, help to create blueprints for a kind of bio-fishing from different peptides (proteins). With the aid of these viruses, researchers are able to “fish” different rare earths out of a soupy liquid in exactly the same way as a key fits into a certain lock,” according to the MDR report. Up to now, however, the researchers have just reached step two of five in the development. But in around seven years time, they estimate that the technology could have advanced to readiness for industrial use.

In “Nachrichten aus der Chemie”, the chemist Lena Daumann describes two possible approaches to tackling rare earths in recycling processes. Ionic liquids can selectively mobilize the luminescent substance yOx consisting of yttrium and europium from waste low energy light bulbs. “Under optimum conditions, europium-stabilized Y203 can be separated by ionic liquids, and once again used as a luminescent substance”, says Daumann. A further recycling and separation strategy is offered by bacteria which adsorb the rare earths. Daumann: “The surface of immobilized Roseobacter-sp. can bind rare earths and, depending on pH, release them. At pH 2.5 only the three heaviest elements thulium, ytterbium and lutetium are bound and thus separated from all other rare earths.”