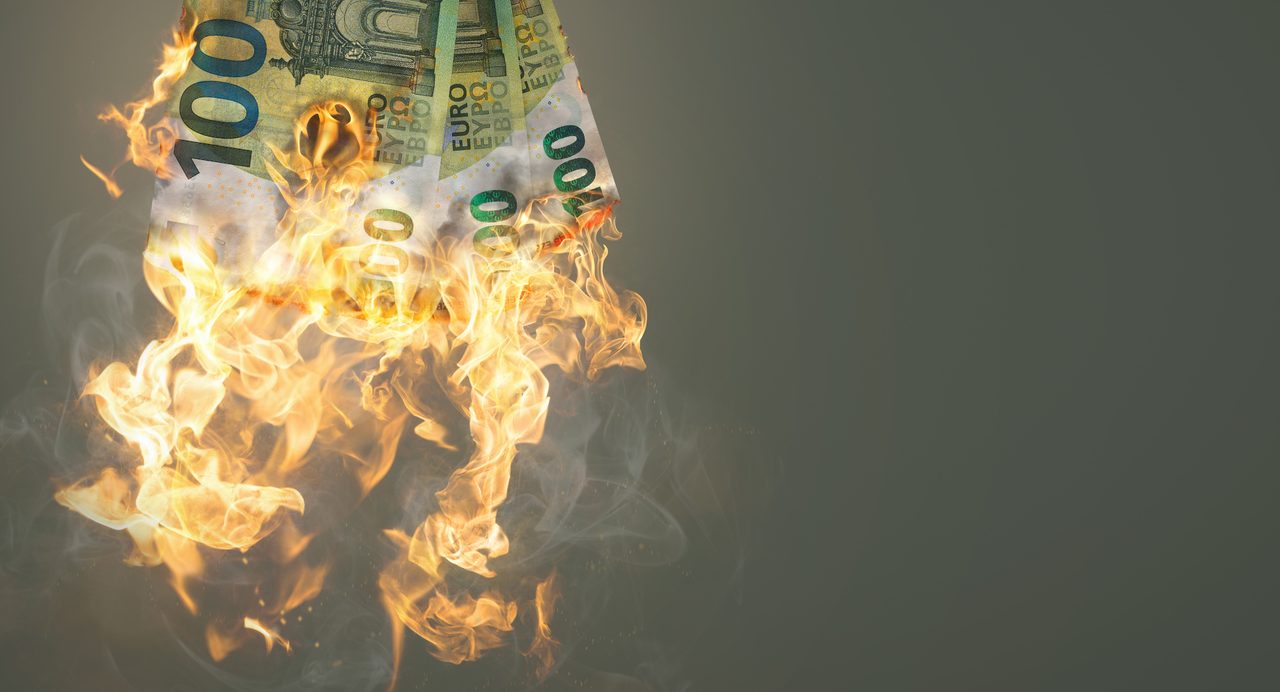 In August, for the first time since 1993, the inflation rate in Germany rose to 3.9 %. Many analysts and experts, but also consumers, savers and investors, are becoming uneasy. Daniel Mohr, for example, commented on 1 September in the FAZ: “Inflation is the greatest threat to assets. The buying power of the money in the checking account or savings book is melting away unrelentingly, often initially unnoticed, that is the insidious thing.” Mohr does the calculation: Even at an inflation rate of 2 %, € 1,000 buying power will have been reduced to € 820 in ten years, at 4 % to only € 675.

And the high rate of inflation is not just affecting Germany. Throughout the entire eurozone, the rate was running at 3 %, the highest level since 2011. In July, the rate throughout Europe was still 2.2 %. In the US, the inflation rate is even higher. There, consumer prices in July were up 5.4 % in a year-on-year comparison.

In the eurozone, it was primarily energy prices which rose in August – by no less than 15.4 %. The prices for industrial commodities increased in the same period by 2.7 %, food beverages and tobacco by 2 %. To date, however, the European Central Bank is not willing to take countersteering action. The Spiegel reports that the EZB regards the current high inflation rate “as temporary” and points to “numerous special effects resulting primarily from the covid crisis”.

Among investors, however, the record marks are already leading to tangible reactions. The rate of inflation, as remarked by the portal Finanzen.net, is reminding investors to make greater efforts to protect themselves against inflation. Stephan Albrech, Chairman of Albrech & Cie. Vermögensverwaltung in Köln puts it even more clearly. In a contribution for Das Investment, he writes: “To put it bluntly: € 270.000 in an account and € 30.000 in ETF are not inflation proof.” The first line of defense against higher inflation would be material assets. “These include shares, property, mineral resources and gold. In this regard, each investor should check the proportion of material assets in their depots: with a rate of under 30 %, even conservative investors have too few material assets in their depots in terms of protection against inflation. All other investors can easily tolerate a higher proportion of material assets,” says Albrech.

Up to now, it seems that not everyone is following the investment consultant’s advice. The gold price, for example, often enough a good seismographic indicator of investors’ hedging behavior, has recently been displaying considerable volatility. On 9 August, for instance, the precious metal slipped under a price of $ 1,700 per fine ounce (around 31.1 grams) for the first time since March 2020, but the level recovered almost as quickly (Rohstoff.net reported).

In the current year-on-year comparison, the gold price dropped by around 7.9 %, before recovering over recent weeks by about 1.3 %. On 30 August, the Swiss Portal Investrends remarked: “Traditionally, investments in gold have been regarded as protection against inflation. However: In 2021 gold lived up to this reputation to only a limited extent”. What’s more: As protection against inflation, gold has been disappointing in the last few months and become temporarily less attractive.

But the fact remains: Since the beginning of the year, Germans have accumulated a stately quantity of gold. According to the Handelsblatt, in the first six months of this year they bought over 90 metric tons of gold in ingots and coins. This is “the largest quantity of physical gold sold in Germany within any six-month period since 2009”, even exceeding the previous record from the first six months of covid in 2020.

A significant decline, on the other hand, has been experienced by silver. In the year-on-year comparison, the value dropped by around 15 %. Ulrich Stephan, Chief Investment Strategist for private and corporate clients at Deutschen Bank, wrote in a newsletter at the end of August: “The white metal recently dropped to the lowest level for the year. In comparison to gold too, silver was trading at a low rate last seen in December 2020. “But Stephan believes in an early reversal of the trend: “In the medium term, this is due to change. Analysts believe that, thanks to the increasing electromobility, demand from the automobile industry is likely to rise from 61 million fine ounces in 2021 to around 90 million fine ounces annually by 2025.“In addition, the continued rising demand for photovoltaic purposes will support the silver prices, Stephan believes. With one proviso: “Like gold, there is a risk that rising real rates of interest could place a burden on investment demand.”

Meanwhile, a considerably more stable trend than with gold and silver is being displayed by two other precious metals: The palladium price rose in year-on-year comparison by around 8.4 %, the price for platinum by around 7.8 %.

Prices for industrial metals are also continuing to rise. In particular copper and aluminum are increasing significantly. Aluminum hit a “10-year high” at the end of August, writes Finanzen.net. According to this report, at the end of August, the metric ton of aluminum on the London Stock Exchange was shown at up to US$ 2,726. Thus the price for aluminum continues to head towards a record high which lies at around $ 3,300 per metric ton. The portal cites Daniel Briesemann, Mineral Resources Expert at Commerzbank, according to whom – aluminum – second to tin – may display the second-strongest price development among the industrial metals. The cause for the price surge for aluminum, however, is not seen to be the increasing rate of inflation but rather, among other things, measures taken by the Chinese government geared towards curbing environmental pollution and lower energy consumption. “Now it is intended to curtail the production of energy-intensive materials such as aluminum in the south-western Chinese Guangxi province,” Briesemann tells Finanzen.net. “Market participants are becoming growingly concerned about possible serious shortages in supplies of aluminum.”

High level of price increases are also anticipated for lithium and cobalt over the next few years – similarly not due to high inflation rates, but rather because of increasing demand. For example, according to analysts, the market value of lithium could be trebled simply on the basis of the plans announced by US President Joe Biden at the beginning of August to ensure that by 2030 around 50 % of all new vehicles sold in the US are emission-free.

This matches the findings of a study of the German Mineral Resources Agency DERA published in March 2021. This shows that the prices for lithium and cobalt, both “key raw materials” for lithium-ion-batteries have risen significantly since the end of 2020. In a range of future scenarios DERA also comes to the conclusion that with the focus on explicitly sustainable business developments the demand for lithium will have increased almost six-fold by the year 2040, the demand for cobalt almost four-fold.

The same applies for numerous other strategic metals and rare earths. The planned energy turnaround, in particular, is resulting, among other things thanks to the expansion of renewable energies and other future technologies, not only in a growing increase in the demand for copper, but is also pushing up the demand and the prices for gallium, neodymium, praseodymium and dysprosium.

Not everyone fears inflation

Summary: Rapidly-increasing inflation is keeping analysts and investors on their toes. As yet, however it is not possible to validly forecast to what extent and, above all, how permanently consumer prices will actually rise in the coming months and years. Similar vicissitude is currently being displayed by investor behavior, including on the commodity market. Greater stability is shown on the other hand by the prices for some mineral resources, which are being driven primarily by industrial demand on the world markets.

For this reasons, other voices are speaking out against the fuss surrounding the current inflation records – at least up to now. For example, in a noteworthy commentary with the headline “It’s a good thing that inflation is rising” which appeared in the Süddeutsche Zeitung on 29 August, author Bastian Brinkmann wrote: “What are perceived as shocking figures conceal a positive development. The fear of inflation is unfounded.” The current increased inflation is good news rather than bad as it means: “In economic terms, we are picking up speed. Now people once again want all those things they had to forgo for so long. Many are feeling this craving for consumption. Economists have a prosaic term for it: “demand pressure“.