E-Scooters – Contributing to the Mobility Turnaround or Damaging the Environment? 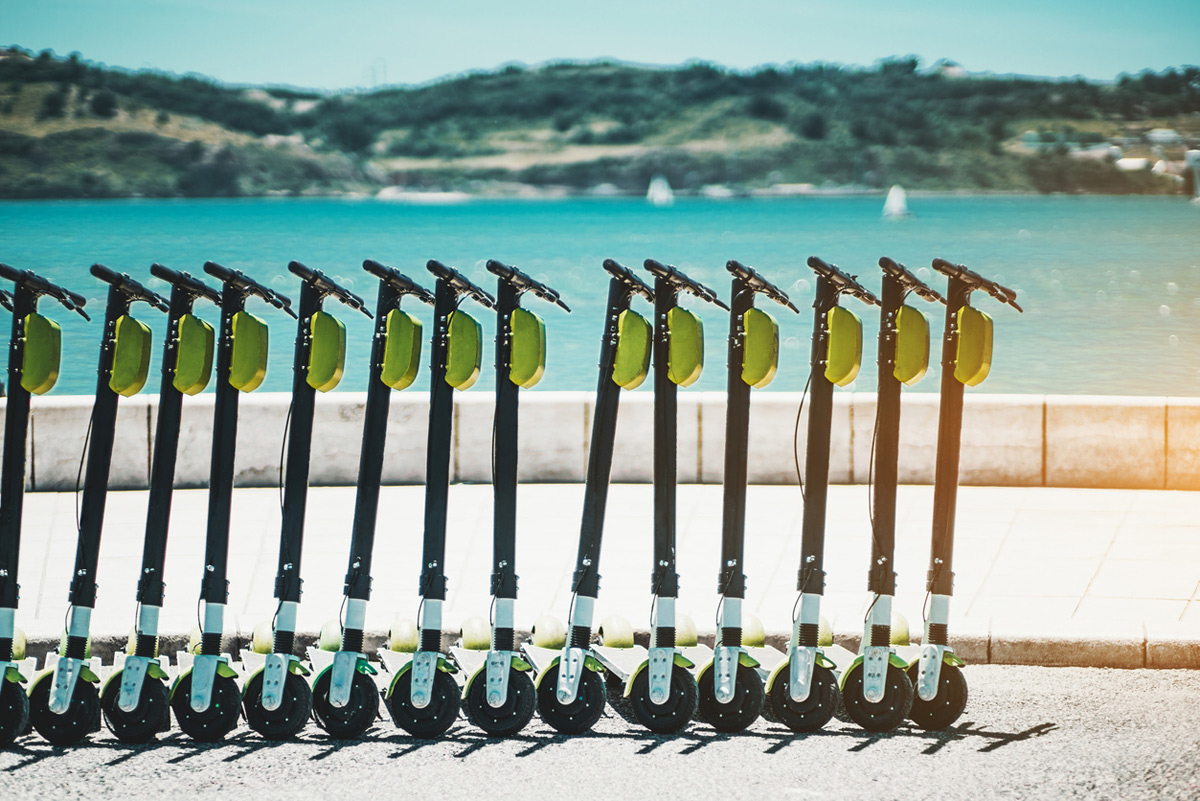 Electric scooters are polarizing opinion. But their numbers are likely to rise.

Electric scooters have long become omnipresent in German cities and we find ourselves practically tripping over them all over the place. Back in 2019, just one year on from the national launch of this new form of mobility, over 30,000 electric scooters were humming around the country’s streets. Suppliers such as Tier intend further expanding their offer in the coming years, as reported by the Tagesschau news.

According to current statistics, despite their omnipresence, the e-scooters are not yet contributing positively to climate protection. Figures from the German Federal Environmental Agency show that the average distance of a journey is just two kilometers. What they are replacing is not so much the automobile but rather environment-friendly means of transport such as the bicycle, public transport or walking. This is problematic as high volumes of energy are required for their production and operation. In addition, large quantities of valuable resources go into the vehicles. Lithium is needed for the batteries, permanent magnets made of rare earths for the motor. Tier states the average service life of a rental scooter to be 24 months. It is claimed that the service life will be significantly increased. Furthermore, charging with power from renewable energy sources and recycling are to significantly improve the ecological balance.

But in order to fully exploit the potential of micromobility, improved coordination with public transport is necessary, writes the Deutsche Energie Agentur (DENA). This has already been put into practice in Berlin with the Jelbi app of the public transport company Verkehrsbetriebe (BIG). The app connects the mobility services offered by the BVG with various providers of e-scooters as well as with car sharing possibilities. The scooters can also be charged up at the Jelbi stations. In Hamburg, the elevated railway is cooperating with the providers Voi und Tier. On the outskirts of the city, in particular, where public transport can be some distance away, the micro vehicles could serve as feeders augmenting the offer.

Not taken into consideration, up to now, was the widespread danger of vandalism and the annoyance caused by incorrectly parked scooters which turn into stumbling blocks. In Cologne alone, over 500 rental scooters have been wantonly thrown into the Rhine, as reported by Westdeutsche Rundfunk (WDR) radio. A salvage attempt planned for the beginning of July was called off. It is reported that the salvage concept was not convincing. The phenomenon is also familiar from other cities around the world. In Paris, the high number of sunken scooters actually led to the establishment of a start-up. The team from “Guppy” retrieves the vehicles from the Seine using magnets. Whether the scooters and their batteries pose a threat to the environment cannot yet be said. Speaking to WDR, Dirk Jansen from the environmental organization Bund für Umwelt und Naturschutz Deutschland pointed out that the underwater currents in the Rhine drag them over gravel and stones. It is unclear whether the battery casings will survive this friction. If they don’t, toxins could leach into the water. Here the onus is on the rental companies in a number of regards. The search must continue for concepts to restrict unauthorized parking. This would go some way to pacifying many of our street users. And the salvage operations have to be carried out sooner; this would set a clear signal that these scooters are not throw-away items.