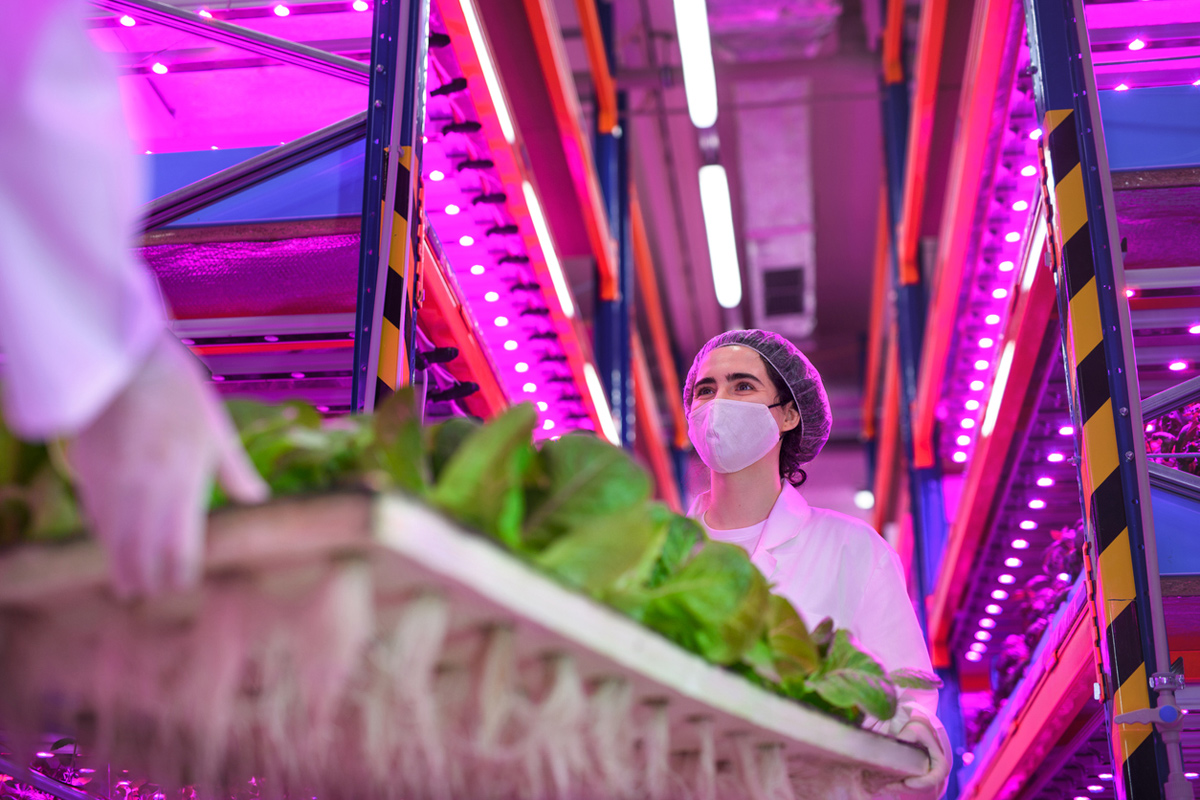 Cultivating food where it is needed: Made possible by vertical farming and LED technology.

The UN estimates that by the year 2030, 60 % of humanity will be living in cities. Increasing urbanization is presenting completely new social challenges with regard to providing resources, food and space. Just as living space can be created in cities through high-rise buildings, farming too can go high-rise. This is the idea behind vertical farming, as can already be seen in many supermarkets. For example, the retailer Edeka is cooperating with the start-up Infarm and offering its customers fresh herbs grown directly in the store in multi-level display cabinets. This cuts down on cultivated acreage and transport costs.

Of course, even in vertical farms, plants cannot grow and produce nutrients by means of photosynthesis without sunlight. The sun can be replaced by tubular lighting emitting the entire spectrum. However, this is associated with high electricity costs which impact on the ecological balance sheet. Significant energy savings can be achieved with the use of LEDs which emit only certain light wavelengths and therefore colors. Blue and red light, in particular, are important for photosynthesis, as explained by Dietmar Prucker from Weihenstephan-Triesdorf University of Applied Sciences. In addition, lighting with LEDs can be adapted to the requirements of the respective plant species and the relevant stage of development.

Blue LEDs are inconceivable without gallium nitride. As a semiconductor, this combination of the technology metal gallium and the gas nitrogen generates light impulses as soon as electricity is applied. Gallium, in conjunction with phosphorus or aluminum, can be used for the production of red LEDs.

At present, vertical farming is not suited to the mass production of cereals or potatoes; in this regard, conventional agriculture is more economical. But even the US Department of Agriculture (USDA) sees in this technology the potential to secure food supplies. Alongside vertical farming, there are further varieties of cultivation in indoor enclosed spaces. LEDs come into play here too. With dedicated “horticulture LEDs”, companies such as Samsung and Osram can already offer the technical means for commercial use.