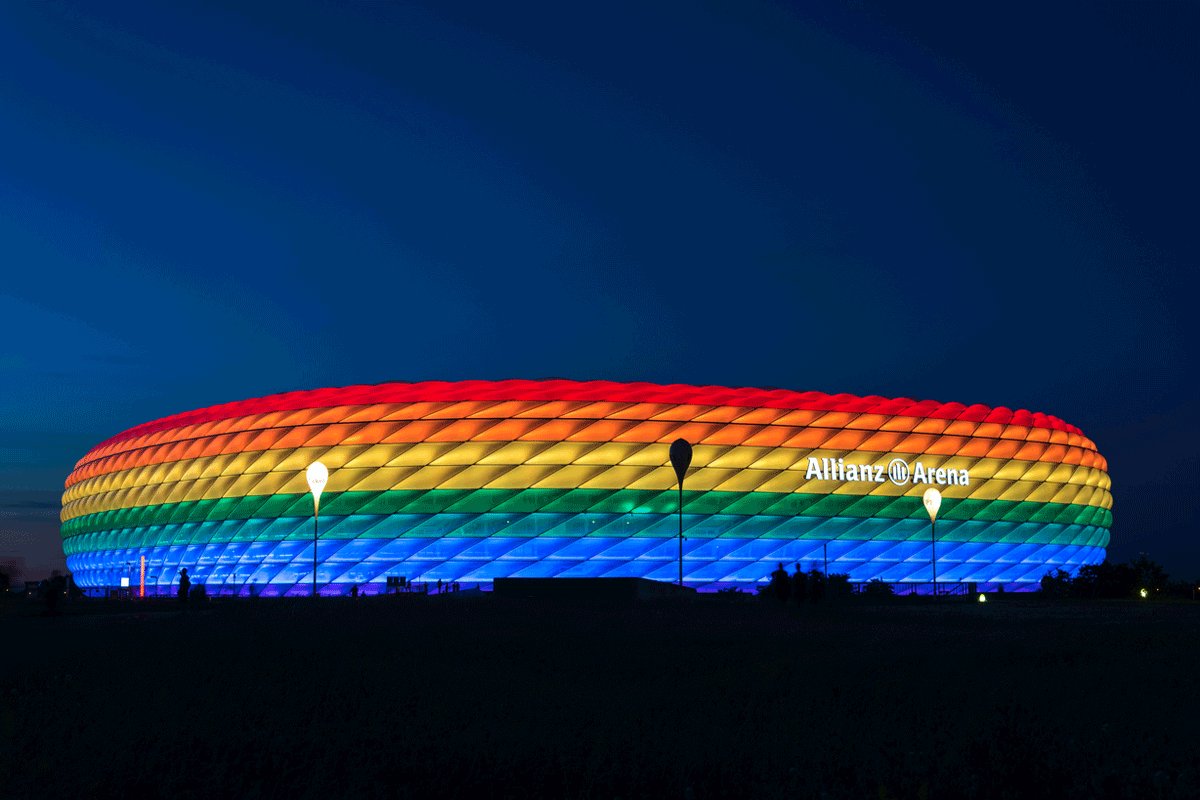 A stadium lit up in rainbow colors during the UEFA EURO 2020 was to make a statement against Hungary’s hostile policy towards the LGBTQ+ community. This visual show of solidarity is made possible by a basic material: Gallium.

Alongside the beautiful game itself, the center of public attention at UEFA EURO 2020 – postponed by one year – focused on areas of social conflict. This became particularly clear following the final when social media was dominated by racist comments after penalty kicks were missed by three black members of England’s national team. In the lead-up to the final, there had been heated debate on the stadium lighting.

In a letter to UEFA prior to Germany’s group match against Hungary on 23 June, Munich’s Mayor, Dieter Reiter, requested permission to have the Allianz Arena lit up in rainbow colors. It was intended as a “visible sign of our common values” as the rainbow stands globally for solidarity with the LGBTQ+ community. The critique was triggered by Hungary’s new Homosexuality Law which, despite widespread protests, came into force last week. According to this legislation, it is now against the law in Hungary to positively portray homosexuality and transsexuality on the school curriculum, in reference books or in advertising. Child protection is cited as the basis for the decision. UEFA saw the move as a political gesture and refused consent. The refusal, which came in the middle of Pride Month, triggered a wave of protests, which predominately found colorful expression. Major corporations changed their profile pictures on social media and other soccer clubs and associations had their stadia and premises floodlit in rainbow colors.

LED stadium lighting systems are becoming increasingly popular. As far back as 2019, environmentalleader.com forecast: “LED lighting is set to replace high-performance stadium and arena lighting.” The latest LED technology is energy-saving and permits not only the showing of rainbow colors but also facilitates complicated light shows. As can be read on the website of the Allianz Arena, this is Germany’s first and “Europe’s largest stadium with an all-round LED external illumination system for dynamic mood lighting”. The overall area of the LEDs installed corresponds to that of 3.5 pitches. 6.500 Philips ColorGraze lamps consisting of 300,000 LEDs have been installed. 16 million color nuances can be achieved.

Prior to the 90s, this blaze of color was unthinkable. Up to then, it was only possible to efficiently generate red and orange LED light. Only with the use of gallium nitride (GaN) as a semiconductor material in LED and OLED (LED with an organic semiconductor component) technology did it become possible to make the entire visible color spectrum shine. At the same time, GaN provides improved light yield. The relevance of gallium for LED technology and consequently for the future of stadium lighting becomes clear from the report of the Institute for Future Studies and Technology Assessment and the Fraunhofer Institute for Systems and Innovation Research ISI, Raw Materials for Future Technologies. This states: “A modern blue light-emitting diode consists of a wide range of different materials such as gallium nitride as a base material, indium gallium nitride as the radiant layer and aluminum gallium nitride to increase efficiency.“

On 10 July, to mark Christopher Street Day, the Allianz Arena finally shone in all the colors of the rainbow, thanks to gallium.