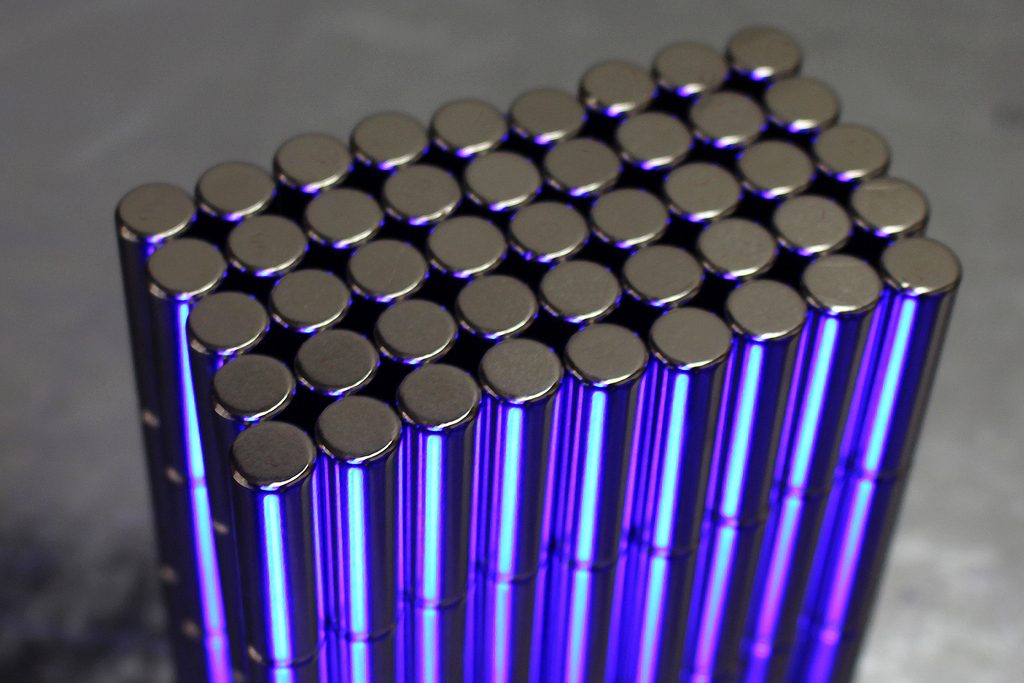 Super magnets with neodymium can be found in headphones, wind turbines and e-motors. The raw material is among the rare earths of the lanthanide group.

As an oxide, i.e. in its chemical compound with oxygen, neodymium has a purplish blue shimmer and – compared to other rare earths – is less susceptible to corrosion. Neodymium is easily inflammable and irritating, and is strongly magnetic. Above all, it is the latter property which makes the technology metal interesting for numerous industries and is driving demand ever upwards.

The technology metal neodymium is numbered among the rare earths. Represented on the periodic table with the symbol Nd and the atomic number 60, it belongs to the lanthanide series. Neodymium was discovered or rather produced for the first time over 140 years ago. Back then, the Austrian chemist Carl Auer von Welsbach succeeded in separating didymium into two substances: praseodymium and neodymium. In its natural form, neodymium is found in the entire Earth’s crust but only in chemical compounds with other lanthanides.

High-tech magnets can lift 1,300 times their own weight

As a neodymium-iron-boron compound, the mineral resource is uses to product particularly strong magnets, known as super magnets. These high-tech magnets can permanently lift 1,300 times their own weight and are used in the most varied of industries – for example to operate MRI scanners, wind turbines and hybrid and electric motor vehicles. Neodymium magnets are also very popular in the production of loudspeakers and headphones due to their highly magnetic properties combined with relatively low weight. Apple AirPods too work with neodymium magnets. Neodymium salts are also used to color enamel, porcelain and glass. Furthermore, the super magnets also come into play in elevators, for example in the One World Trade Center in New York.

The diverse application options, in particular for the numerous future technologies, can by imagined: The hunger for neodymium among worldwide industries is not set to abate in the years to come. On the contrary: Experts assume that demand will rise sharply. Portal Energie.de reports that in the estimation of the EU Commission, demand, particularly for dysprosium, neodymium, praseodymium and samarium will have increased more than tenfold by 2050 as compared with the figures for 2020. On the world market, the most significant supplier of neodymium – and almost all rare earths – is China. Around 90 % of global production also originates there. Further economically-significant deposits of neodymium can be found in Australia and the GUS states.