Neodymium in Your Ear 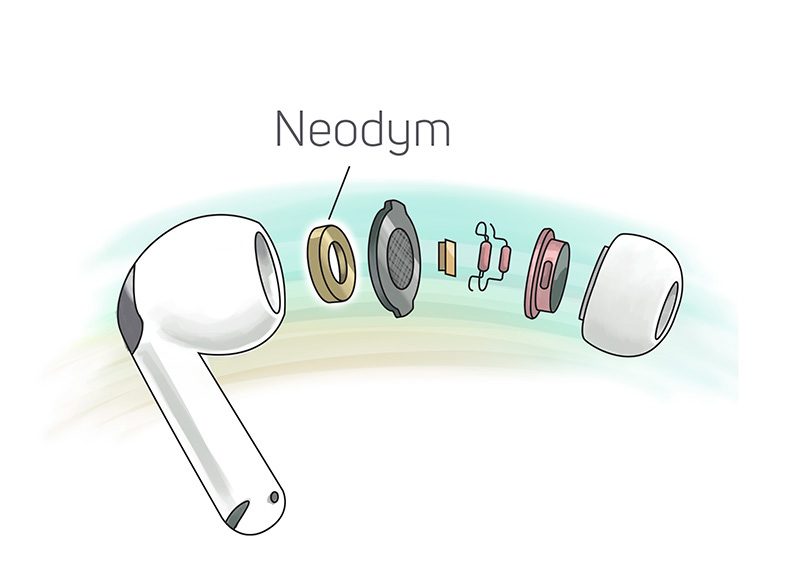 High-power magnets are used for wind energy and e-mobility. But also in headphones.

Working from home offers many benefits but, in view of the sinking number of Covid cases, many branches are preparing to bring their employees back into the office. The morning commute is starting up again and we are returning to the common sight of people cutting themselves off from the world around them by donning headphones. Podcasts and music go some way to taking the sting out of days that begin with a missed train or simply far too early.

According to a survey carried out by Bitkom, Germany’s digital association, 71 % of Germans own headphones. In-ear headphones i.e. models which are inserted into the ear conch, are the clear favorite. In this area, models connecting entirely wirelessly with one another and with the cell phone are catching up fast. The breakthrough for this model came from the US producer Apple in 2016 with the AirPods. With 57 % market share it is still the undisputed market leader in this area, as current data shows.

In these headphones, Apple relies on magnets made of neodymium alloys, which are a component in the drive unit. This sets the loudspeaker membrane vibrating, which causes electrical impulses to be converted into audible sound. Wherever weight and volume are to be cut down, neodymium magnets are the first choice. Because, even at the same size, they are significantly more powerful than ferrite or alnico magnets. No compromises are made in terms of sound; after all, the audio quality is the most important purchase criteria for headphones. This is also reflected in data of the consumer research company Gesellschaft für Konsumforschung (GfK).

A material for the future

Neodymium magnets are also built into high-end headphones for use at home or in the recording studio, and they are used in sound systems for concerts.

However, the demand for neodymium magnets is primarily being driven by the expansion of renewable energies: The material is used for generators in wind turbines. Here, cutting down on weight is of major significance. This applies similarly in the area of electromobility. Neodymium magnets perform sterling service in the engines of e-automobiles. Thanks to the addition of dysprosium – another rare technology metal – the magnets resist even high temperatures of up to 220 °C.

Like many technology metals, neodymium originates primarily in China. The mines in the autonomous region of Inner Mongolia and in Sichuan in the south-west of the country possess the greatest deposits of neodymium. The European Commission estimates that demand will increase three-fold between 2030 and 2050. In view of the significance of the material, is it hardly surprising that the US government under President Joe Biden recently announced its intention to recommence the mining of rare earths and technology materials.