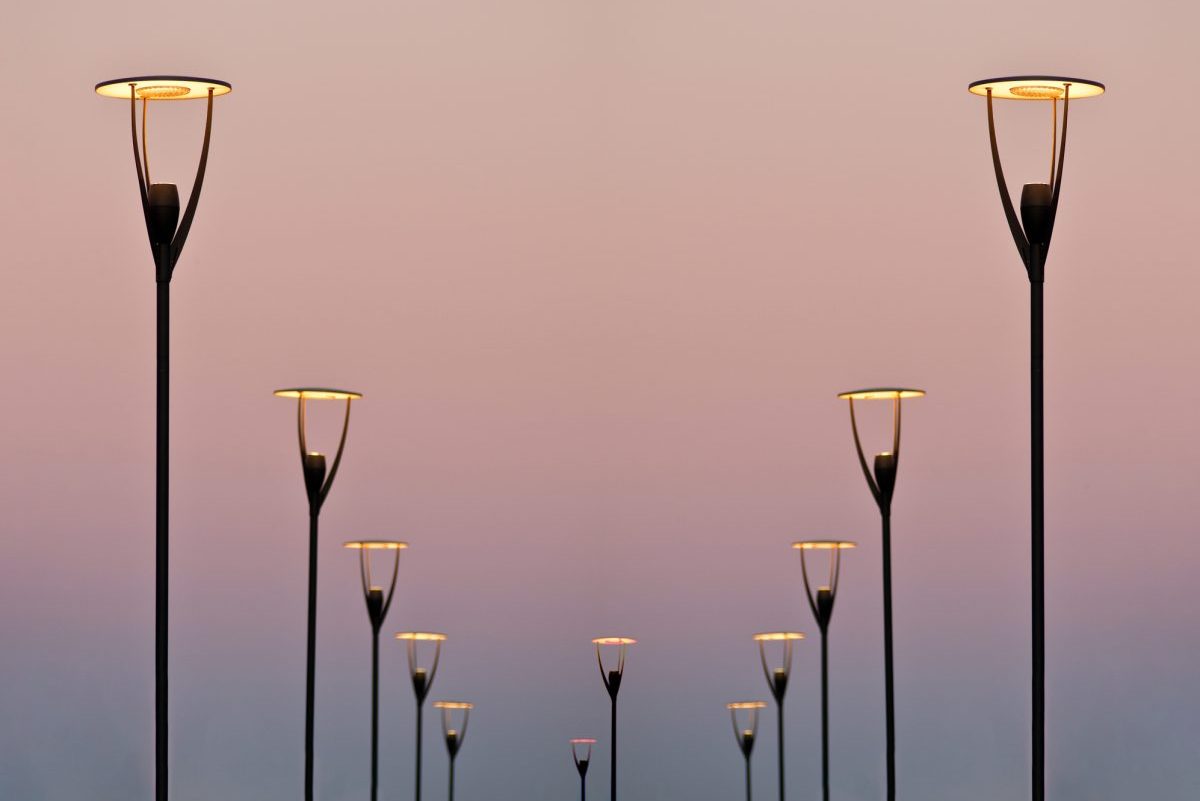 Compulsory photovoltaics, more wind turbines – climate protection measures are on everyone’s lips. Street lighting, however, is rarely mentioned in this context even though converting to LED technology would save energy, CO2 emissions, and electricity costs.

The transition from filament to semiconductor elements is thought to be a turning point in the history of light generation. Compared with traditional lamps, light-emitting diodes (LEDs) have many advantages: They are much more energy efficient, have a longer life, reduce electricity and maintenance costs and even CO2 emissions.

In their early days, LEDs were criticized for their typically cool-white, bluish light, but now they are available in almost all colors and luminous intensities. This is made possible by various semiconductor compounds with the technology metals gallium and indium: gallium arsenide phosphide, for example, for red LEDs, aluminum gallium indium phosphide for green and indium gallium nitride for blue. No wonder, then, that light-emitting diodes have long since become the standard illuminant in many private households, offices, and public buildings. A lot of catching-up has to be done in many places, on the other hand, when it comes to street lighting.

Only recently, Hesse’s Minister of Economics and Energy, Tarek Al-Wazir (Green Party), appealed to cities and local authorities to convert their public lighting to LED. Despite funding programs, only just under half of Hesse’s 714,000 streetlights have been retrofitted so far. Nationwide, the situation is no better: According to an information brochure (PDF) published by the German Energy Agency (dena), in 2016, only 20 per cent of local authorities were using LED as the most common form of street lighting. This emerged from a study (PDF) in which 927 local authorities were surveyed. Nevertheless, 76 percent of local authorities also stated that they were in the process of modernizing their street lighting predominantly with LEDs. In 2018 Luke Roberts, manufacturer of smart lamps, conducted a random survey of the percentage of LEDs among the 1.2 million street lights in 20 German cities: the result – an average value of just 11 percent.

According to the Central Association of the Electrical and Electronics Industry (ZVEI) and the German Federal Association for Street Lighting and Infrastructure (bvsi), about one third of all streets and roads in Germany are still lit with obsolete technology from the 1960s. In smaller communities in particular, public lighting accounts for up to 50 percent of annual electricity consumption.

So there is plenty of potential for improvement: Experts estimate that the use of modern lighting technology could save cities and municipalities up to 400 million Euros nationwide. At the same time, the 1.6 million tons of carbon dioxide and 2,700 gigawatts of electricity saved as a result would be a major step forward for climate protection. Smart lighting management, for example dimming down the amount of light in the late night hours, would improve the energy balance even more.

And it should not be forgotten that retrofitting municipal lighting is becoming increasingly urgent due to new legislation: Since 2015, the sale of high-pressure mercury vapor lamps, which are still sometimes used in streetlights today, has been forbidden in the EU.

Many Authorities Shy Away From Investment Costs

The dena study also investigated why modernization is proceeding so hesitantly despite all those facts. The result: Although there are many funding measures at federal and state level, the high purchase price of LEDs is apparently deterring many local authorities. 42 per cent said that their hesitancy was caused by a lack of financial resources. There were also uncertainties regarding maintenance costs and light quality. According to a study by the auditing company PwC (PDF), as many as 84 percent of local authorities were not using more LEDs because of the investment costs. Around half were also unsure about the long-term economic viability of the technology.

Conversion to Led More Economical in the Long Term

However, examples from practice show that the high initial costs pay off after only a few years. In 2015, Giessen was one of the first cities in Hesse to start modernizing street lamps. The lamps were converted to LED in two stages, costing 1.4 million resp. two million Euros, and the state and federal governments contributed around 50 percent of this sum. Annual energy consumption has already fallen by 70 to 80 per cent, saving more than 500,000 Euros in electricity costs. Other areas such as childcare are now benefiting from this.

Geestland in Lower Saxony set itself the goal of converting its entire street lighting to LED as early as 2009. This made them pioneers not only in Germany, but throughout Europe. In addition to electricity savings of around 70 per cent, annual CO2 emissions were reduced by 500 tons. Other cities such as Hameln or Kronach can also boast impressive balance sheets.

Energy-Efficient, but Not Environmentally Friendly?

But despite all the LED euphoria, there are also some critical voices. Many conservationists warn that night-time “light pollution” could be a major factor in increased insect mortality since glaring light sources attract the species in droves and quickly become a death trap for them. Researchers at the University of Mainz have calculated that up to one billion nocturnal insects are killed every day by Germany’s streetlamps. However, several studies, including one by Friedrich Schiller University of Jena, for example, show that there are apparently major differences depending on the type of light.

Whereas the old mercury vapor lamps basically act like a magnet for moths, ladybugs, and the like, with LEDs it is the light spectrum that counts. Cool white or bluish LEDs attract a comparatively large number of insects. LEDs that shine in warm white or red, on the other hand, are considered insect-friendly and are also recommended by nature conservation organizations such as BUND. Fortunately, lighting with gallium and indium is easy to implement.