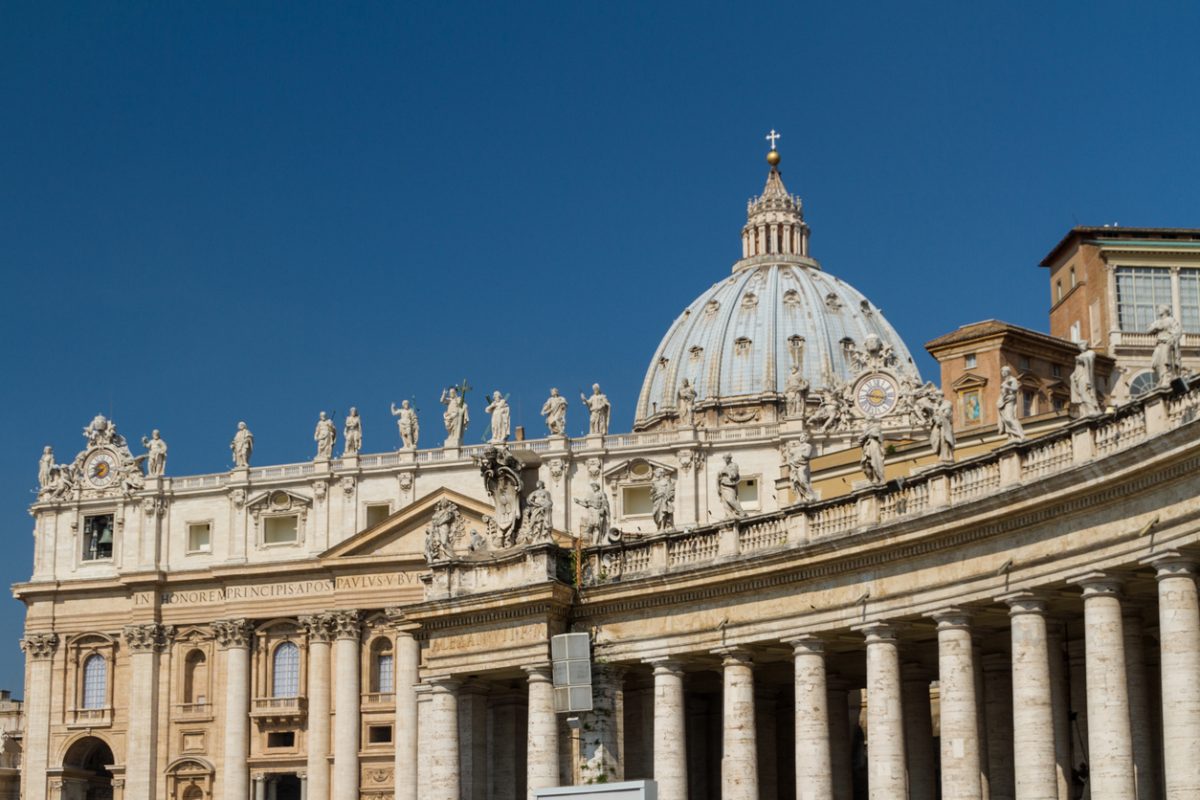 The Vatican wants to become climate-neutral and, in addition to photovoltaics, is also relying on LEDs and electromobility.

The smallest state also aims to become the greenest in the world: we’re talking about Vatican City. With only 44 hectares and 618 citizens, the seat of the head of the Roman Catholic Church forms an island in the Italian capital of Rome. Visitors who take a careful look at the time-honored buildings may be in for a surprise, as tradition and innovation meet in the Vatican in a very small area. Visible when looking from the observation terrace atop St. Peter’s Basilica are solar panels on the papal audience hall. A total of 2,394 solar modules cover the hall of the building, which was inaugurated in 1971. They were installed back in 2008 during the tenure of Pope Benedict XVI and have been producing about 300 megawatt hours of energy annually since then. The modules were donated by the then industry leader Solarworld from Bonn.

View from the dome of St. Peter’s Basilica to the audience hall with its more than 2,000 solar modules.
Photo: iStock/diliananikolova

Benedict’s successor, Pope Francis, in office since 2013, has ordered the city-state in 2020 to achieve climate neutrality by 2050. This is a daunting challenge, as tens of thousands of visitors stream through St. Peter’s Basilica and the Vatican museums during the day, significantly increasing energy demand. Many museum visitors take the shortcut to the main attraction: the Sistine Chapel. There, the installation of LED lighting has reduced electricity consumption by 90 percent. At the same time, the LEDs give visitors the best view of the unique frescoes at all times. In addition to better visibility, the focus was on conservation aspects, because future generations should also be able to enjoy Michelangelo’s masterpiece. The lighting specialist Osram was commissioned with the design. The company offers a virtual tour of the chapel on its website to anyone who has not yet had the opportunity to visit.

Osram also supplied the lighting technology for St. Peter’s Basilica. 780 luminaires with more than 100,000 LEDs perform their service in the huge house of worship. The world-famous square in front of it with its surrounding colonnades is also illuminated by LEDs. 132 LED floodlights provide sufficient light for Masses and other events. Compared with the previous lighting, they and a lighting management system can achieve electricity savings of 70 percent.

The commitment to climate and resource protection includes many other measures. These include improved waste and water management, which makes the management of the numerous garden sites much more environmentally friendly. The transition to electric mobility is also being driven forward, and there are now already twelve charging stations on the national territory, built by the Italian energy company Enel. The Holy Father’s vehicle, known as the Papamobile, could also be electric in the future. Henrik Fisker, founder and CEO of the e-car manufacturer that also bears his last name, made suggestions in a private audience for an emission-free vehicle for public appearances by Francis. This is to be based on the Fisker Ocean, which is expected to come off the production line in November 2022.

Pope Francis in St. Peter’s Square in the open “Popemobile,” which is based on the Mercedes Benz G-Class. Consumption: just under 15 liters in the gasoline version. Photo: iStock/Birute